Becca Lowry’s work will be on view at VOLTA NY (March 2 – 6) and in an exhibition with Tom Burckhardt (Feb. 27 – April 2) Check out the great review written by Oana Sanziana Marian for ARTFORUM included in the January 2015 issue.

“She was the Angelina Jolie of wolves.” So said one of Yellowstone’s biologists of the gray wolf they called the ’06 Female, to whom Becca Lowry dedicated RIP 06 (all works 2014), one of the six sculptural pieces exhibited in her first solo show. In a series of carvings, Lowry trenched and scored the work with an angle grinder, a skill saw, chisels, and, eventually, a rasp; inlaid it with steel; spray- and handpainted it; and, finally, scraped it with a razor. RIP 06’s most delicate element—a vertebraic column down its middle—serves as its center of gravity. Winglike panels extend from the spine like leaves of a book catching a draft of air, while the fringed rectrices of the wall-mounted work’s lower anatomy dangle below them. This centrifugal movement transfixes, like a starburst. The ’06 Female (the wolf), too, seemed to transfix and transform all who saw her. She was killed—legally, it must be said—by a hunter in December 2012, but not before garnering legendary status among the biologists who tracked her, for her beauty and unusually large size, and for jilting five able suitors (extraordinary behavior for a wild wolf) in favor of hunting alone (dangerous for even the largest males), before starting a pack with two inexperienced males of inferior size, which the ’06 Female groomed into skillful hunters, and whose pack still runs strong. 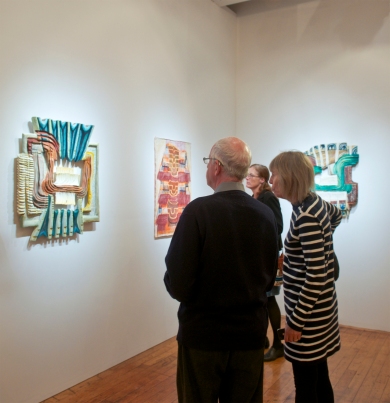 In addition to the six carved works in this show, titled “be me I’ll be you,” there were four works on paper, the most striking of which, Mountains on Mountains, arrests the viewer with repeating ranges of bright orange and blue triangles. As with the sculptures, some areas are cut out and scraped with intricate patterns, while others are layered, here with translucent paint and bits of rice paper in lieu of steel and spray paint. Although Lowry’s works on paper often begin with rubbings from her sculptural works, she has never made any traditional prints. Yet, as with an etching, the history of marks remains embedded, if not wholly visible, within the work’s surface.

“Spiritual” works of art are often of a sticky substance, ways of describing them even stickier. And though Lowry does not explicitly describe the works in this way, they do feel spiritually attuned. Somatic, playful, reminiscent of the combustible forms and colors of Kandinsky and Klee, the pieces in “be me I’ll be you” are what the poet Adrienne Rich might have called “instruments for embodied experience.” Evoking a strip of flesh here, a rib, a phalanx there, they point to their own haptic necessities—asking to be touched, picked up, weighed—but the works also possess the power to stir latent imperatives in the viewer. This leap of faith seems more plausible when you consider the physically brutal process (an embodied experience in itself) of their construction.

Lowry wasn’t thinking of the ’06 Female when she began RIP 06, but after she learned of the wolf, the work assumed an elegiac force, and the artist started to see the object she was making as a shield for those who stand alone and burn. “If these shields actually worked,” Lowry says, “if, like Spider-Man’s suit, they fused to the body of the vulnerable and awakened superhuman strength and courage . . . I would be obliged, and you would be obliged, to stop whatever it is we’re doing right now and mass-produce these things.” The power of this redirected cabinetry lies in the realization that protection can come from the most vulnerable forms. No one can say with certainty by what alchemy vulnerability becomes a shield, but mystics and theologians have tried.